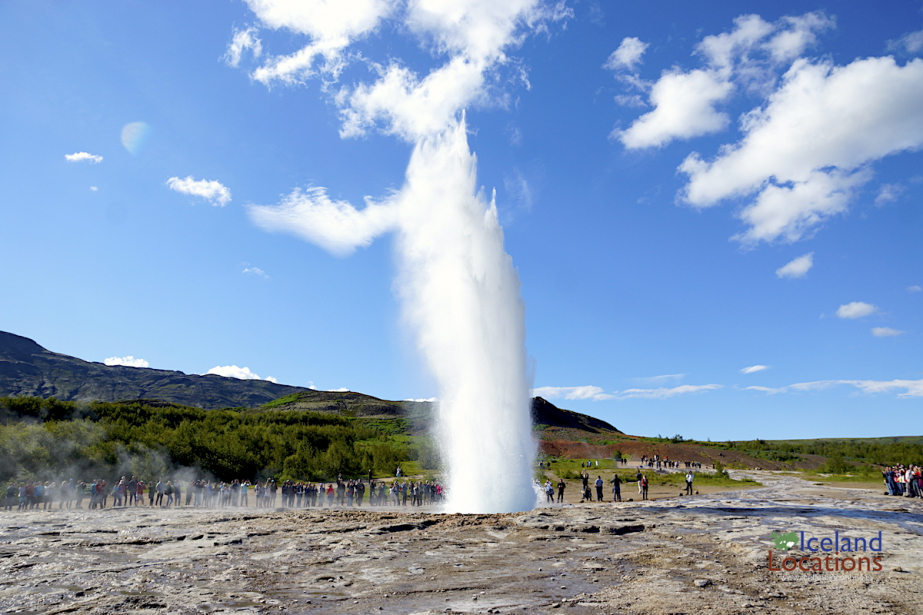 From Reykjavik, there are a few tour destinations that are very popular. These tours are mostly operated by large buses, but for those that want to travel in comfort and be in control of their schedule, a private tour is an option to consider. These destinations are very popular to photograph.

A Northern Light tour from Reykjavik

The time is calculated from pick up to drop off in Reykjavik Metro.
For pick ups and drop offs outside Reykjavik Metro, consult with us for appropriate time.
Free pick-up/drop-off at your accommodation/BUS Stop in Reykjavík Metro.

The Golden Circle Tour is the most popular. The usual visited destinations are: Thingvellir National Park

. Usually dining is at Geysir or Gullfoss. There are several options on this route, incl.: Snowmobiling tour from Gullfoss, Dining at Efsti Dalur or Fridheimar, Diving into Secret Lagoon Hot spring, a visit to the waterfall Faxi

and a visit to  the crater Kerid. Note: Most of these optional stops need to be booked in advance.

Thingvellir or Þingvellir in Icelandic, is the most sacred of places in Iceland. Here in a Rift valley between the American and EuroAsian tectonic plates parliament was established in Iceland in the year 930 and continued to be here until 1798. It was protected by law in 1928 and in 2004 Þingvellir was accepted on the Unesco World Heritage list for its cultural values. The rift valley is also a majestic example of the rift between the two tectonic plates.
Geysir hot spring area is named after the original Geysir (Geyser) that would spew hot water as high as 70 meters. Geysir has now retired, but his little brother Strokkur has accepted the choir of spewing hot water and erupts about every 7-10 minutes as high as 40 meters, even though average eruptions are closer to 15 to 20 meters.

Gullfoss waterfall in the river Hvita, and is the most famous waterfall in Iceland. It falls in two stages over two tectonic faults at 90° to one another. Gullfoss was saved from being a victim to a hydro electric plant in early 20th century. Its survival has been credited to a woman, Sigridur Tomasdottir in Brattholt, the daughter of one of the owners, but she fought hard to have the waterfall protected. Later historical explanations dispute this, but what ever was the case, Sigridur, who inherited a part of the ownership from her father, did her best to get the waterfall protected. She may have been the first tourist guide in Iceland as she routinely would bring visitors to the waterfall.
Faxi is a waterfall in the river Tungufljot.
The Secret Lagoon is optional for those that want to relax in geothermal hot springs. Admission to the Secret Lagoon is not included in this tour. Pre-booking is recommended as access can not be guarantied on the day. Find out more about the Secret Lagoon here.
To fit the itinerary a reservation to the Secret Lagoon should be made for 2pm on the day of the tour. Book the tour before booking the Secret Lagoon. A one hour visit to the Secret Lagoon would replace the visit to Kerid to keep the 9 hour schedule. To keep Kerid also in the itinerary the tour would extend to approx. 10 hours.
Kerid is a volcanic crater, belonging to a row of craters that erupted 6.500 years ago. The crater is 55 meters deep. In the crater there is a lake that is like a window to the ground water in the area, and the surface of the water will rise and fall with the hight of the ground water. The crater it is easily accessible for anyone that can make a short walk up a hill.
Free pick-up/drop-off at your accommodation/BUS Stop in Reykjavík Metro.

The South Coast Tour is the second most popular tour from Reykjavik. The usual visited destinations are Seljalandsfoss

. The bus tours stop at Vik terminal for lunch and the drive back to Reykjavik. There are some options on this route, incl.: Solheimajokull Glacier (possible Glacier Hike), Dyrholaey Cliff

, Local restaurants in Vik. Note: Some of these options need to be booked in advance.
Free pick-up/drop-off at your accommodation/BUS Stop in Reykjavík Metro.

The Snæfellsnes tour is a popular tour around the Snæfellsnes peninsula in the West of Iceland. Here the main attractions are: Budir, Arnarstapi

. Some optional attractions are: Seal Beach

. This tour is usually around 12 hours.
Free pick-up/drop-off at your accommodation/BUS Stop in Reykjavík Metro.

. The 14 hour tour in the booking module allows 5 hour drive each way, 3 hour stop at Glacier Lagoon/Diamond Beach and 1 hour combined pit stops on the way there and back. These stops can be used for stops at some of the South Coast attractions. Optional at Glacier Lagoon are boat tours on Glacier Lagoon (Amphibian 30-40 minutes / Zodiac 60 minutes). These tours need to booked in advance. A possible stop is another Lagoon, not far from Glacier Lagoon.

The South Coast and Glacier Lagoon tours could be combined in a two day tour. By extending the tour to three days (in summer) a trip further east could be added and a possible snowmobile tour on Vatnajokull Glacier. Note: This needs to be booked in advance.


Free pick-up/drop-off at your accommodation/BUS Stop in Reykjavík Metro.

Pick up and drop off for day tours

Pick up is on time. Please be ready in time for your pick up in front of your hotel or guesthouse or at the BUS Stop you chose when making the reservation.
Drop can be after indicated arrival time due to the location of your accommodation and during winter return times can vary due to weather conditions. Please let the Driver/Guide know at the beginning of the tour of any appointments that may be affected by the arrival time.

Tours and services are dependant on currency fluctuation and other services, After the tour has been paid, the charge will not change unless the customer asks for extended time and it is approved by the driver/guide.

Tours are guided in English.

Bring suitable clothing for the Icelandic exterior, warm and water resistant, water resistant walking shoes, hat and gloves. This is for your own comfort while exploring the exterior sites. On Northern Light Tours, bring extra warm clothing so you can be outside for extended time in the cold Icelandic Night.

Kindly limit consumption of food to “snack type foods” (candy, chips, cookies etc.). All food items that make a mess in the car if spilled are not accepted in the car. Only beverages in covered containers are allowed on board.

Iceland Locations ehf. reserves the right to change routes, itineraries or time schedules without prior warning, should the necessity arise. No liability is accepted for losses or expenses due to delays or changes of arrival or departure of flights or other services, injury, sickness, accident, strikes, damage, negligence, weather, war or other causes outside the control of Iceland Locations ehf.. All such losses and expenses are the personal liability of the traveller.

Online Payments with Credit cards from Mastercard & Visa are accepted. There is no charge or service fee for processing credit card payments.

All cancellations must be made in writing and should be sent to This email address is being protected from spambots. You need JavaScript enabled to view it.. If it is not possible for you to send us your cancellation via email, please contact us by phone (+354 897-0899) and send us a text to that phone number including your name and number of reservation. Cancellations received less than 24 hours prior to tour departure will be charged in full. 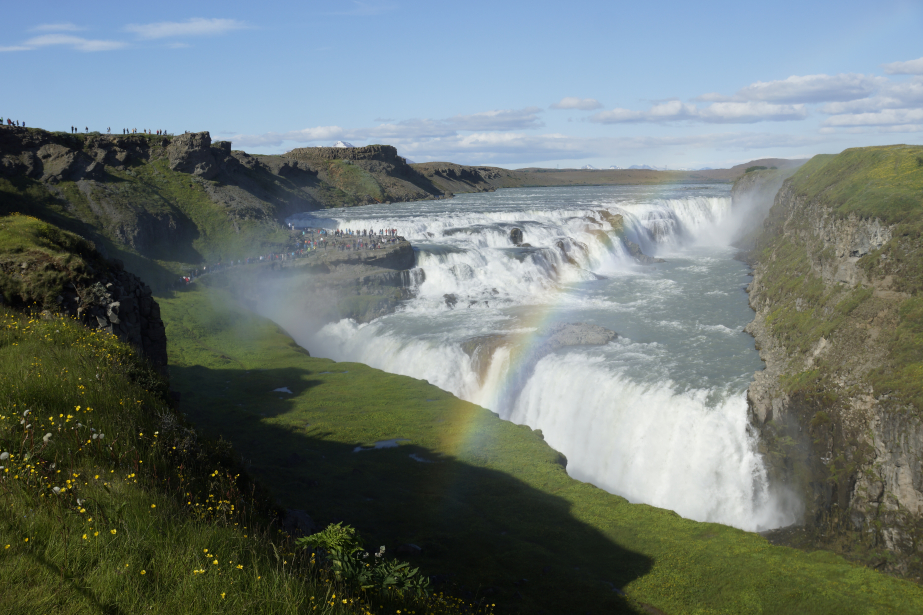 The Golden Circle is the most popular tourist excursion in Iceland. On this tour one will visit the Thingvellir national park, Geysir Hot spring area and Gullfoss waterfall. Optional are visits to the Faxi waterfall and Kerid volcanic crater.

Choose ONLY ONE (1) Tour Below.

THE PRICE ABOVE INCLUDES UP TO 7 PASSENGERS.

Note for multi-day tours and tours not listed here:
We are very flexible. Please send us a post with your requirements regarding travel time, what you want to see and experience, and how and where you want to travel. We will make a customized itinerary and make you an offer for the tour, provided your time of travel fits our schedule.